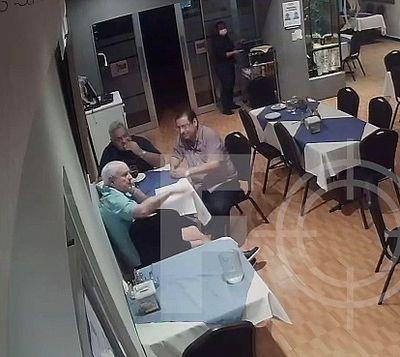 Former President Ricardo Martinelli’s video with the alleged husband of one of the judges who formed the trial court who acquitted Martinelli of illegal wiretapping is not evidence but rather a “clue” that the State Ministry is investigating lawyer and columnist Rodrigo Noriega must initiate towards TVN.

What now goes on, according to the lawyer, is to go to the main sources, that is, Martinelli, to check the reality of the fact. If he denies that the other person is Judge Marisol Osorio’s husband, then ask him to know his version and later the State Ministry will have to use whatever technology he has to identify people and thus confirm who it is.

If it turns out that it is not the judge’s husband, as described in the video, the FOCA would have to compensate or apologize, otherwise, if it is actually the judge’s partner, a chain of events will ensue.

â€œI was concerned about the judicial authority‘s lukewarm response. You are required by law to investigate these type of events and check with the judge to see if the person is their spouse or not. This administrative investigation must be carried out. “

For Noriega, there are means out there that could prove a patrimonial movement existed, but what is important is that there is an interest in investigating before the possible evidence disappears.

Another statement that Noriega’s attention is drawn to is that of the US Department of Justice about what happened in New York, where they thank the prosecutors involved in the process, the Swiss State Department and the authorities. from Guatemala and El Salvador, but it missed our Panama, which means Panama did not cooperate or was not part of the process.

Noriega says the international community is sending strong messages from countries with robust justice systems that “Panama is not trusted” so they need to see these cases, and stresses that New York has already had two money laundering convictions.

Law of gravity
â€œThey laundered the money from an Odebrecht bribe, especially for a relative who was a high-ranking official between 2009 and 2014. We all know who this relative is. That is not a fact that is being discussed, it is not a novel, it was not the parallel prosecutor, the rival president did not invent it, no one invented it, this is a fact that is practically like the law of gravity, “he said

It recognizes that corruption cases neither begin nor end with the Martinelli family, but are part of the country’s history because it is a pending debt of Panamanian democracy to have a judicial system that truly counteracts corruption.

â€œProsecutor Caraballo has been acting for nine months, if President Cortizo’s government had wanted to ratify it in the National Assembly, it would have done so long ago if it had not, because of the hostility of certain MPs to the prosecution of drug trafficking and Prosecutor Caraballo advocates this, â€said Noriega.

Disclaimer: MENAFN provides the information “as is” without any guarantee. We assume no responsibility or liability for the accuracy, content, images, videos, licenses, completeness, legality, or reliability of the information contained in this article. If you have any complaints or copyright issues related to this item, please contact the above provider.

Those were the tweets with the most likes of the year