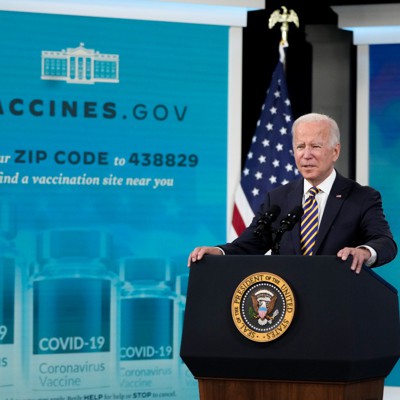 How the Biden government vaccinated almost all of the federal workforce

Almost 93% of the federal workforce have now received at least one dose of COVID-19 vaccine, and more than 97% are fulfilling President Biden’s mandate by either getting an injection or filing for an exemption.

The effort represented a significant boost and an unprecedented challenge to the von Biden government, which, according to administrators and internal agency communications, used a variety of resources, guidelines and print campaigns to increase their numbers. Shortly after taking office, Biden formed the Safer Federal Workforce Task Force, composed of officials from the White House, the Office of Personal Management, and the General Services Administration, which ultimately took the lead in coordinating the implementation of the vaccine mandate.

The task force helped facilitate conversations between authorities so they could share what worked and what didn’t, officials on the panel said Government executive on condition that they are not mentioned. It drew on the expertise of member organizations, such as the Centers for Disease Control and Prevention Guidelines for Public Health Practices and the Human Resources Office for vacation and staff policy. The process was iterative, officials said, as they continually sought feedback from the heads of the agencies on their open questions and updated the guidelines accordingly. The task force helped the agencies set internal deadlines to meet certain benchmarks.

“So much depends on having this deadline, having this goal and getting people to do it,” said a member of the task force, adding that the panel had emphasized that it would allow the agencies to share with each other what was successful – and what was not. “If you try to implement something through such an organization, you cannot communicate enough.”

From these meetings, according to the members of the task force, the authorities learned the importance of constantly collecting and analyzing vaccination data so that they know exactly where they stand. If some regions or components lag behind others, authorities could take steps – such as holding town halls, initiating meetings with supervisors, or distributing literature – to catch up. Agencies were able to determine the best time of day to speak to different sections of their workforce, whether to use bulletin boards or widely used Xeroxed and distributed papers, or to use the best strategies for posting on their intranet sites. The data collection and communication helped the authorities with this troubleshooting.

â€œDid we put it in the right place, did we ask the right people, is the type and rhythm of the work such that the type of engagement we do is appropriate, or do we have to have different points of contact when people? said the officer, describing the kinds of questions the task force helped the agencies think through.

Although small pockets of staff across the government claimed they would not receive the vaccine, and a slim majority of officials said they did not approve of Biden’s mandate, the results show that the process worked for the most part. While the government couldn’t share the federal workforce’s vaccination rate at the time Biden signed his mandate in September – citing difficulties gathering information when the deadline was still months away – anecdotal evidence suggests greater, at least for some authorities Turn towards. At Customs and Border Protection, for example, data shows that around 25% of the workforce were able to demonstrate their vaccination status shortly after Biden announced his mandate. Today the agency is at 87%. The Internal Revenue Service has commenced vaccination procedures for 22,000 employees since the president’s announcement. In the two weeks since the deadline, the authorities have seen the number of their non-compliant people drop by 20%.

The authorities followed different approaches in the run-up to the vaccination deadline, including messages from top management. CBP made personal appeals to employees in videos sent to their employees. A copy of it was made by. receive Government executive.

“Think about your health, your career,” said Manuel Padilla Jr., CBP’s assistant commissioner for operational support. “Your loved ones and your families and how your decision affects them.”

A second spokesperson in the video – another deputy executive commissioner, Mark Borkowski – appealed for a broader understanding of the public sector among employees.

“We serve a higher mission,” said Borkowski. â€œI know that, like the boss and I, we are all proud to be part of CBP and the mission that CBP is fulfilling. But with public service comes responsibility. It comes with an obligation to make public service more important than our own interests. This is the situation that many of us find [our]in today. “

Executives explained the schedule and possible disciplinary action, with Borkowski suggesting the November 22nd deadline for federal employees to confirm their vaccination status was “not an accident” as the cloud of discipline could hover over Thanksgiving. They stressed that the discipline would be progressive, take weeks to develop, and be influenced by the past disciplinary performance of employees. They predicted layoffs would start in January if necessary.

Since then, OPM and the Office of Management and Budget have urged the agencies to postpone severe penalties until the new year for those failing to meet their mandate. Agencies like CBP had previously planned to suspend some unvaccinated employees in December. In the Justice Department, for example, internal emails from. 10-day bans begin as early as December 5th Government executive. While the advisory messages sent to non-compliant CBP employees, a copy of which were also sent by Government executivewho specifically labeled communications as “non-disciplinary”, judicial officers labeled their communications as “disciplinary / advisory letters”. The judicial notice said the staff received many reminders of their commitments and informed the recipients of their (now outdated) five-day countdown before more serious disciplinary action was taken.

Task force officials said the threat of discipline played a role in increasing vaccination rates, but news about the agency’s safety and mission are almost as critical.

“The most important thing is to convey how seriously the organization takes the compulsory vaccination … and there are many different ways to do this,” said one official. “Of course you should make it clear that there are ultimately consequences if you don’t stick to them.”

The government is not planning any further delays in punishments for non-compliant federal agencies, task force members said, which means the suspensions are likely to begin in January. They assume the non-compliance rate will continue to fall in the coming weeks, so the Pentagon and civil authorities won’t have to fire the 100,000 or so federal and military personnel currently under advice. Where layoffs occur, “the agencies will do it,” said one official.

Agencies are also currently processing their exemption requests, with some relying on individual regulators to make eligibility assessments and others, like CBP, with a “governing body”. Decisions can take a few days or weeks, depending on the operating environment and other factors that authorities need to consider. Workers who are deemed ineligible, either because their application is rejected outright or because their specific job does not allow for placement, have an additional two weeks to decide whether to get vaccinated before facing disciplinary action.

A member of the task force suggested that the government’s high compliance rate lies primarily with the heads of the agencies and regulators who led the indictment on the ground.

“Of course the task force can provide guidance, but ultimately these results reflect the thousands, if not tens of thousands, of people who invested that time and led this effort,” the official said. â€œLate nights, weekends, missed dinners, who knows what, to make sure they are getting in touch with someone, having that conversation, and managing that data. It is a reflection of the great people we have in the federal government, how happy we are that they are doing this fantastic job here. “