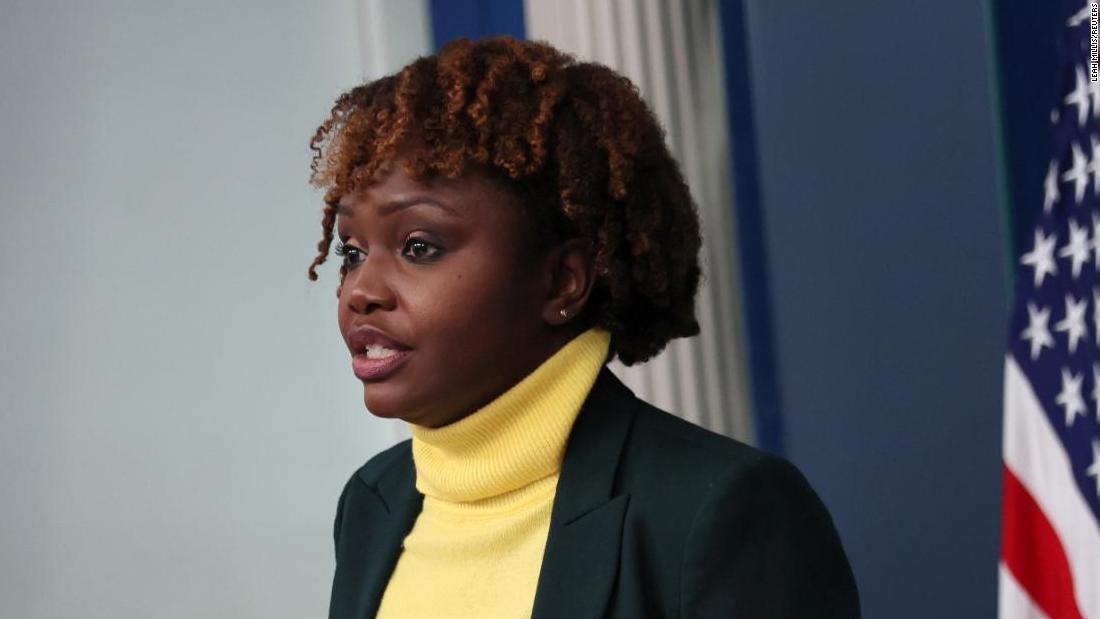 Jean-Pierre is currently the deputy chief press secretary for the White House.

“Karine not only brings the experience, talent and integrity required for this difficult task, but she will continue to lead the way in communicating the work of the Biden-Harris administration on behalf of the American people,” said Biden in a statement. adding, “Jen Psaki has set the standard for the return of grace, respect and decency to the White House briefing room.”

Jean-Pierre will officially start after Psaki’s last day, May 13th. CNN reported in April that Psaki was planning to leave her role for one on MSNBC.

Last May, Jean-Pierre became the second black woman in history to hold the daily press conference. She has served on the senior White House communications team since Biden took office, having previously served as his campaign adviser and chief of staff to now-Vice President Kamala Harris.

“I’m still processing it because, as Jen said, this is a historic moment at the helm and it hasn’t escaped me. I understand how important it is to so many people out there. So many different communities that I stand on their shoulders,” said Jean-Pierre.

She added: “It is an honor and a privilege to be behind this podium.”

“She’s been just a wonderful colleague for the last year and a half, a friend, a mentor and I don’t think I would be here without so many people but to include her and she’s just a real solid, amazing person,” said Jean-Pierre.

Jean-Pierre is familiar with her new role. She’s often in the room when Psaki briefs reporters, has filled in for her at the lectern, and has also gagged reporters who were traveling with Biden on Air Force One. Recently, she replaced Psaki at the last minute for Biden’s four-day trip to Europe amid the Russian invasion after Psaki tested positive for Covid-19 the day before Biden left.

Psaki’s departure comes as no surprise as she has been public about her plan to leave after a year on the job. Several names have been considered to replace her, including Pentagon spokesman John Kirby, who has become a visible face of the government in briefings and on cable television since the Russian invasion of Ukraine began.

At Thursday’s White House briefing, a visibly moved Psaki invited Jean-Pierre onto the podium with her, and the two women embraced as Psaki went through Jean-Pierre’s qualifications and the significance of taking on the job.

“I just want to take this opportunity to celebrate and congratulate my friend, my colleague, my partner in truth, Karine Jean-Pierre, the next White House press secretary,” Psaki told reporters at the White House.

She added: “She’s going to be the first black woman, the first LGBTQ+ person to take on this role, which is amazing because representation matters and she’s going to give a voice to so many and allow and show so many what is real.” possible if you work hard and dream big and that counts and… we should celebrate that.

Psaki also addressed Jean-Pierre’s career, describing her as a “remarkable” person with “decades of experience”.

The press office reshuffle comes as the White House is taking several other staffing moves to prepare for a possible Republican takeover on Capitol Hill in the midterm elections. One of Biden’s closest advisers, Anita Dunn, will return to the West Wing as senior adviser as his team also bolsters the White House Counsel’s office as Republicans have promised to launch a series of investigations if they retake the majority.

Though Dunn no longer owns any part of the firm after it was sold in 2015, her role as a top strategist for Biden, former President Barack Obama and many other elected Democratic officials has given SKDK significant prominence in Washington and beyond. During the presidential campaign and the first few months of the Biden administration, Dunn took a leave of absence from the firm. But given her new role in the White House, people familiar with the matter say she is parting ways with the company.

An official says Dunn will now be a full-time staffer and — like any other full-time staffer — will sign the ethics pledge, file an OGE 278 and be subject to all of the White House’s ethics and conflict of interest rules, including “rigorous consultation” on her ethical obligations.

This story was updated Thursday with additional developments.

CNN’s Jeff Zeleny and Sam Fossum contributed to this report.

Here’s how often lawyers don’t want to return to the office: The morning minute