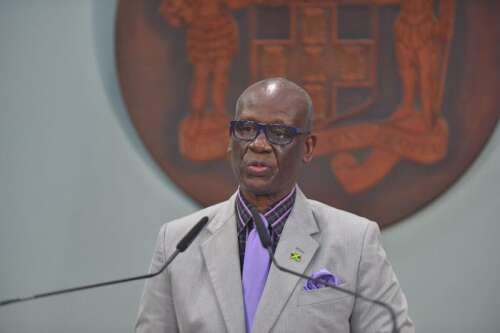 The minister’s comment is the latest in an ongoing dispute over prime beach land seized by the informal settlers.

Golding visited residents of Little Bay and Brighton last Thursday to give hope to settlers who have been ordered to vacate the land following a recent court ruling.

Speaking to the settlers, Golding stressed that the government should not let them down, saying: “You may not have legal title yet, but you have lived on the property and invested in your property well beyond the 12 years required by law.” So these situations cannot be ignored by the government.”

However, in a statement on Sunday, McKenzie condemned the opposition leader’s remarks.

“The comments attributed to both the opposition leader and the mayor of Savanna-La-Mar are not only shameful but dangerous. They have met directly with the residents and told them that they will stand by them not only in spite of the law but also the courts’ clear decision that they must vacate the land. Given Mr. Golding’s presence and comments at this meeting, I conclude that promoting lawlessness through property rights violations is the official policy of the opposition and of the Peoples’ National Party he leads,” McKenzie said.

“No responsible political representative behaves like this. Mr. Moore’s conduct, both as Mayor and as a Negril Division Councilman, is contrary to every principle that informs the Local Governance Act, and as Secretary I deplore his statements, which are reprehensible and undermine the real authority of the Westmoreland Municipal Corporation in the Enforcement is undermining the provisions of the building code throughout the community,” he added.

According to McKenzie, the statements made by the opposition leader are even more serious.

“I do not believe that as a seasoned attorney he is ignorant of the law and the rules of government, and I view his comments as entirely opportunistic. They also have extremely serious implications for property rights in Jamaica. Mr Golding’s comment about the people of Brighton, Little Bay and Salmon Point having rights to the land they occupy because they have lived there for over 12 years is particularly misleading. He should know that there is no law that supports this. The statute of limitations states that people who have had undisturbed ownership of land for more than 12 years – in other words, vacate ownership without being asked by the owner of that property – can go to the courts to claim ownership of the land. Nowhere in Jamaica is there automatic ownership of land through squatting. I would also like to make public Section 12 of the law, which states: ‘No one shall be deemed to own land merely because he has made an entry on it,’ the minister said.

“As a lawyer and as leader of the parliamentary opposition, Mr Golding should know that his comments represent the government’s legislature, which is calling on the country’s citizens to defy the judgments of the courts, the government’s judiciary. Both he and Mr Moore, who is a member of his party, have advised citizens in a face-to-face meeting that it is okay to behave unlawfully. They have also sent a signal of lawlessness across the country to all who own land, large or small, that their property is not secure, that the fruits of their hard labor can be easily taken away. It sends a signal to a potential investor that he or she should consider a country other than Jamaica. It sends a signal to a potential returnee that he or she should consider staying abroad rather than returning home,” McKenzie added.

The minister further assured law-abiding citizens that the government will continue to respect their property rights.

McKenzie noted that the PM had recently met with people in Little Bay, Brighton and Salmon Point and advised them, among other things, that the court’s ruling must be obeyed and urged squatters to respect the law and not themselves to be influenced by “irresponsible statements”.

Senator Elizabeth Warren of Massachusetts: Democrats will lose the 2022 midterm election if we stop delivering