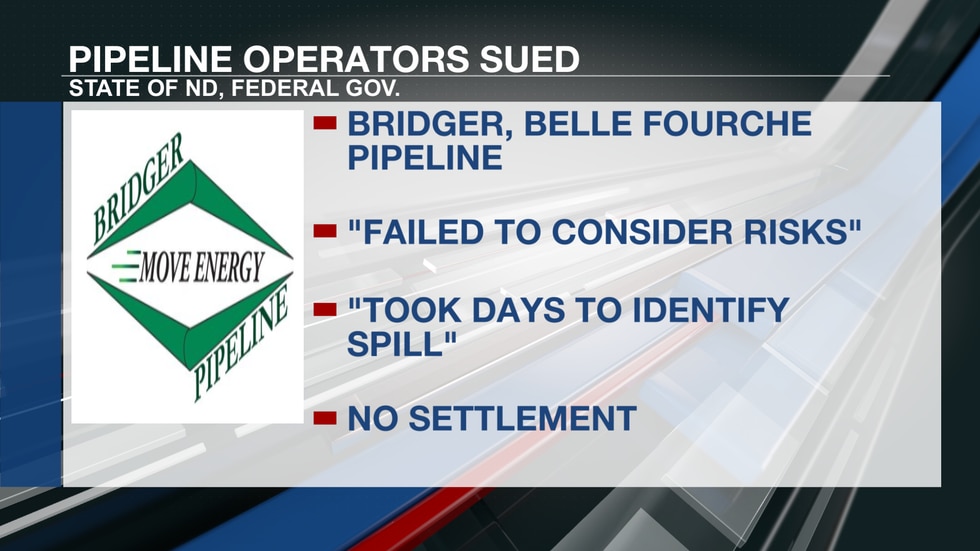 BISMARCK, ND (KFYR) — The state of North Dakota and the federal government are suing two pipeline companies over oil spills in 2015 and 2016.

They are seeking civil penalties against Bridger Pipeline and Belle Fourche Pipeline for spills on the Yellowstone River in 2015 and at Ash Coulee Creek in Billings County in 2016. The state is also seeking reimbursement for clean-up costs at Ash Coulee Creek.

Court documents argue that Belle Fourche failed to consider the risk of a slope failure and failed to identify the leak for days until it was reported by a rancher. A spokesman for the companies said they were disappointed that an agreement could not be reached.

“We’ve been in talks with the government for a number of years and thought we were making good progress, but unfortunately here we are,” said Bill Salvin, spokesman for Bridger and Belle Fourche Pipeline.

More than 14,000 barrels (600,000 gallons) of oil spilled from the creek and Little Missouri River in December 2016. The clean-up work is still ongoing today.

“The focus at this point is on the ground immediately adjacent to the creek where there is still crude oil in the ground, and that can impact the creek as well,” said Karl Rockeman, director of NDDEQ’s water quality division.

Plaintiffs say crude oil continues to affect and contaminate surface water, groundwater and soil at and near the site. Salvin says monthly testing refutes that.

The federal government is also seeking penalties for a 2015 spill on the Yellowstone River near Glendive, which led to Dawson County officials issuing a no-drinking notice for nearly a week.