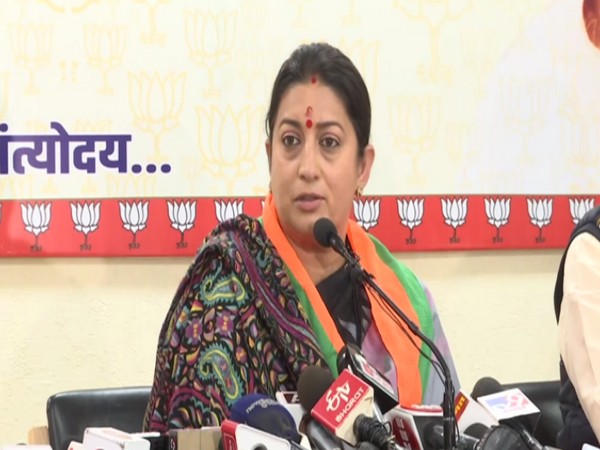 Jaipur (Rajasthan) [India]February 7 (ANI): Union Minister Smriti Irani reminded him on Sunday of the loan waiver he had given the farmers of Rajasthan in a sharp attack on Congress leader Rahul Gandhi amid ongoing peasant protests.
Speaking to the media here in Jaipur, Irani slammed Gandhi for failing to keep peasant loan waiver pledge ahead of the 2018 Assembly elections in Rajasthan, saying, “Rahul Gandhi made an open promise that peasant loans will be canceled in 10 days when Congress forms its government in Rajasthan, but the farmers are still waiting for the promise to be fulfilled. “
Gandhi announced in his speech ahead of the 2018 assembly elections in Rajasthan that if Congress forms its government in the state, he will waive farmers’ loans within 10 days of the formation of the cabinet.
Irani targeted Gandhi ahead of his visit to Rajasthan on February 12th and 13th to show solidarity with the farmers who are protesting against the central agricultural laws.
Speaking of soaring gasoline and diesel prices, Irani said the center was trying its best to cut fuel prices, adding that the Gehlot government in the state has enough funds to lower fuel prices.
“The Ashok Gehlot government in the state has enough funds to lower fuel prices. Now it is up to him how much burden he wants to relieve the people in the state,” she added.
The union minister added that in the union budget presented earlier this month, the government allocated Rs.223.846 billion to the Atmanirbhar Swasth Bharat program.
“The budget has allocated Rs 100,000 crores for road construction,” she said.
She also mentioned that the budget will also help strengthen the country’s agricultural sector. (ANI)

Disclaimer: The views expressed in the above article are those of the authors and do not necessarily reflect the views of this publisher. Unless otherwise stated, the author writes in his / her personal capacity. They are not intended and should not be viewed as the official ideas, attitudes, or guidelines of any government agency or body.