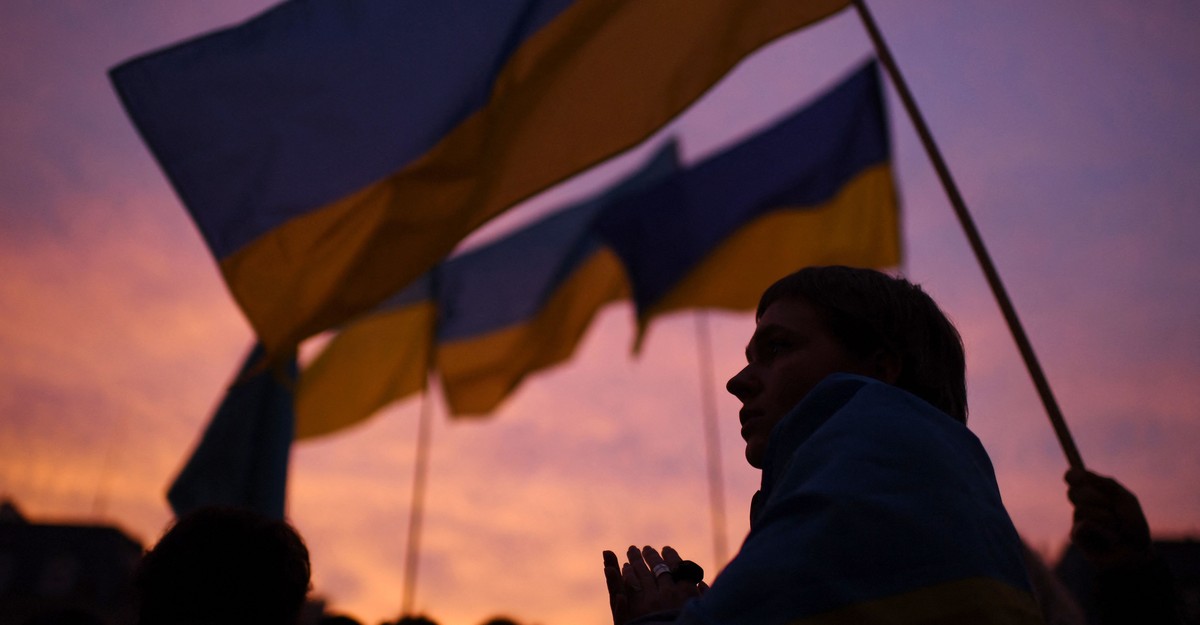 Ukraine has already won the war for its identity

The war in Ukraine is not only about territories. And while Ukrainian soldiers are repelling Russian invaders far to the south and east, a different kind of battle rages on on one of the most picturesque streets in central Kyiv.

Located at 13 Andriivsky Descent, the Mikhail Bulgakov Museum honors a 20th-century author who spent much of his life in my country’s capital but wrote in Russian — and consistently portrayed Ukraine and its people in a negative light . In works like the 1925 novel White Guard, Ukrainians are violent savages whose language irritates the ears of educated people. One main character describes pro-independence Ukrainians as “scum with tails on their heads” – a derogatory reference to the traditional haircut of the Ukrainian Cossacks.

The museum, along with an adjacent sculpture showing the author seated on a bench, is a major landmark in central Kyiv. I pass it regularly during the assignment. That summer, as the invasion of Russia dragged on, the National Union of Writers of Ukraine called for its closure. In a statement, the group argued that the writer, who died in 1940, no longer deserved the honor and that the exhibits should be given to the National Museum of Literature. Bulgakov is one of the cornerstones of Russian expansionist ideology, the statement said. Its Ukrainian critics view the museum much like many Americans view statues of Confederate generals — that is, as an endorsement of a hostile and repugnant value system. “The son of a Russian censor, Bulgakov hated Ukraine as an idea and developed his views in his writings,” Ukrainian literary scholar Bohdana Neborak, a supporter of the anti-Bulgakov campaign, told me via email. “He scoffs [at the] Ukrainian language and disregards the right of Ukrainians to a nation state.”

The campaign to ban Bulgakov only faltered when Culture Minister Oleksandr Tkachenko spoke up for the writer last month, declaring: “You shouldn’t touch the museum under any circumstances.”

Ukrainian culture, authorities believe, is rich enough to stand up to a dismissive, long-dead literary figure. But the intensity of the debate over Bulgakov underscores how a decade of Russian aggression has made the people of Ukraine—including myself—far more suspicious of our neighbor’s cultural influence. The current invasion that began in February has made many of us passionate advocates of our own language, literature and music.

Russian President Vladimir Putin recently accused us of becoming an anti-Russian enclave. Today I believe that he is right. What he doesn’t mention is that he’s the one who made us anti-Russian.

Like Bulgakov in the 20th century, many Russian commentators criticize Ukrainian independence and scoff at the Ukrainian language. Supporters of Putin’s invasion consistently claim that Russia is fighting Nazis and preventing Ukraine from oppressing ethnic Russians in Donbass and elsewhere. In order to free us from ourselves, the Kremlin’s forces began shelling our major cities, where Russian speakers are still in the majority.

Like Bulgakov, I was born in Kyiv – in my case in 1991, the year of Ukraine’s independence. Unlike in western Ukraine, almost nobody around me spoke Ukrainian. My Russian-speaking parents grew up in Soviet Ukraine. My grandparents considered the fall of the USSR a great tragedy. At home, my mother and father talked about the thriving culture of Moscow and St. Petersburg. They knew most of the great Russian composers but never took the time to look for Ukrainian ones. They thought that Ukrainian literature could never compete with world-famous works by writers like Dostoyevsky or Bulgakov. They were never taught at school how the Soviet authorities executed members of the Ukrainian resistance during and after World War II, and they saw the residents of rural Ukraine as eternally whining about past misery.

At school, my underpaid and unenthusiastic teachers grumbled about the heroic periods of Ukrainian history and asked us to read tragic masterpieces of Ukrainian literature. But as soon as I left the classroom, I was immersed in a Russian world. Before 2013, to get a good job in journalism, you had to know, speak and write Russian, which opened up opportunities to reach a relatively wide audience. Speaking Ukrainian as a main language meant significant career barriers.

During my childhood and early adult years, Ukraine was inundated with films that consistently portrayed my country and its citizens negatively. In Crime brat 2, the hero is a Russian chauvinist. Ukrainians are portrayed as gangsters. in the Kandagar, a war drama about Russian pilots smuggling weapons into Afghanistan, a Ukrainian team member is a coward. On TV shows, Russians were our older brothers—smarter, more urban, and generally superior. They were the ones who won World War II and saved all of Europe. Ukrainians were jolly younger brothers with a silly language and primitive culture.

During this period, commentators urging the Ukrainian public to embrace our genius writers and historical figures who fought for independence from Russia throughout our common history were portrayed as nationalists or even Nazi collaborators.

In pirated American and French films, I saw people proudly embracing their own heritage, not someone else’s. But I ignored my nationality because I thought it was irrelevant in the modern world.

The Euromaidan revolution of 2013/14 changed that. Many Ukrainians yearned for closer ties with the West. But our then-President, Viktor Yanukovych, was so pro-Moscow that he refused to sign an Association Agreement with the European Union, which our Parliament had approved; Instead, he advocated closer integration with Russia. His regime beat, illegally imprisoned and even killed people who protested his takeover. Street protests drove Yanukovych out. Russia’s subsequent occupation of Crimea and fomenting pro-Russian uprisings in eastern and southern Ukraine was a revelation of how far we were from being brothers with the Russians. Witnessing all of this, I felt like I was struck by lightning.

Anne Applebaum: The Other Ukrainian Army

During this period I started reading Ukrainian authors and paying more attention to Ukrainian artists. I learned from the historian Yaroslav Hrytsak that Russia has always treated Ukraine not as an equal or even as a little brother, but as a colony. In Serhiy Zhadan’s novels and plays, I read about how pro-Russian forces had corrupted eastern Ukraine. Electronic folk band Onuka brought traditional Ukrainian instruments back to our popular culture. A decade ago, voices challenging Russian narratives were hard to find in the Ukrainian media, but that’s no longer true. According to a law passed by our parliament in 2016, a quarter of the songs played on radio stations had to be in Ukrainian; That rate has since increased, and stations have typically exceeded it.

Nevertheless, in 2020, six years after the start of the Russian invasion, the Russian language was still predominant on Ukrainian television and on the streets of the largest cities, civil society group Prostir Svobody reported. Like most people I know, I wanted to believe that language had nothing to do with politics. Why couldn’t you speak both Russian and Ukrainian and love both cultures?

Yet even among many of us who grew up primarily speaking Russian, Russia’s aggression has fueled support for a 2019 law that would make Ukrainian our country’s sole official language. According to an August poll by the Rating Group, a think tank, 86 percent of respondents supported such a rule — more than 20 points up from before the recent invasion. In comparison, only half of the respondents said they only speak Ukrainian. Most people know, as do I, that even if all business of government is conducted in Ukrainian, the Russian language will still be widely spoken in Ukraine after more than 200 years of Russian dominance.

The official-language law is less popular in eastern and southern Ukraine, where residents are more Russian-speaking and where pro-Russian TV channels have tried to convince viewers they are being attacked. Protecting these people from Ukrainian nationalists was one of Putin’s pretexts for war. But his invasions have made Ukraine more Ukrainian.

In 2012, according to Rating Group, 57 percent of respondents said Ukrainian was their native language. After the full-scale invasion began in February, that number rose to 76. Over the past decade, the proportion of Ukrainians who claim to be Russian native speakers has fallen by half, from 42 percent to 19. Mostly in the east and south , more people speak Ukrainian regularly than before this year’s invasion. Around 2016, after traveling abroad, I decided to switch to Ukrainian as my default language. When a woman in Montenegro heard me talking to my husband, she asked me if I was Russian. I corrected them. Realizing that I was offended, she replied: “Then why do you speak Russian?” I had no answer. Who would want to be associated with an invading nation?

Survey data shows that Ukrainians have sharply reduced the number of Russian songs and TV shows they consume. Popular performers have changed their repertoire accordingly. Classically trained pop star Olya Polyakova, Ukraine’s answer to Lady Gaga, used to sing mostly in Russian but now performs more material in Ukrainian and English. “Nobody forced me not to speak Russian,” she told an interviewer. But, she added, it was “very painful” to appear in language related to the army’s invasion of her country.

All of this is a natural reaction to what Russia has done to us. We’ve seen our supposedly superior brothers kill civilians, ruin our cities, and steal our washing machines. More and more of my fellow citizens are realizing that accepting our Ukrainian identity is a matter of survival.

Speech and music have proven powerful weapons on the home front, as has equipping the High Mobility Artillery Rocket System on the warfront. Common values ​​are even more important for today’s Ukraine. Standing against the Kremlin’s army, which is snuffing out individual hopes and imposing authoritarian rule on Moscow, are Russian-speakers and Ukrainian-speakers; Christians, Jews and Muslims; and people from different ethnic groups – all of whom want a society where disagreement is tolerated and even celebrated.

The Bulgakov Museum remains open on Andriivsky descent. The sculpture commemorating the author still stands nearby. And although some called for his cancellation, other Ukrainians – heirs to a nation he once despised so much – covered him with sandbags to protect him from Russian shelling.

Democracy in the US also has weaknesses