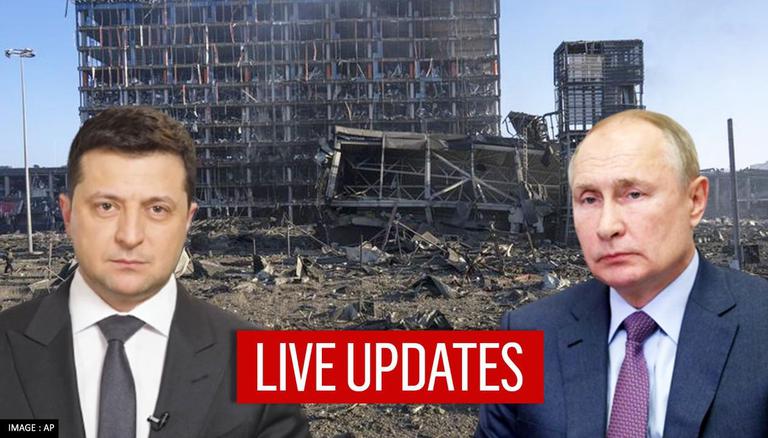 Tanks, planes, missiles, air defense systems. Citing a long list of weapons he said are vital to his country’s survival, Ukraine’s president on Thursday increased pressure on NATO leaders to call for “unrestricted military assistance” and told them that Ukraine’s armed forces are “in a gray area between the West and Russia, defending our common values.”

“That’s the worst thing about war – not having clear answers to calls for help!” Volodymyr Zelenskyy said in an emotional video address to NATO leaders gathered in Brussels for an emergency summit.

Zelenskyy called on NATO to provide Ukraine with “1% of all your planes, 1% of all your tanks” and said: “If we have all this, it will give us 100% security, just like you.”

“I just want you to know that the Alliance can still prevent the deaths of Ukrainians from Russian attacks and from Russian occupation… by providing us with whatever weapons we need.”

The appeal came as international efforts to make Russia pay for its aggression and stem Europe’s biggest security crisis since World War II shifted focus to Brussels. The Belgian capital became a flurry of diplomatic activity as US President Joe Biden and other leaders huddled together for a day-long series of talks on the fallout from the war, including the possibility of further sanctions on Russia, how to deal with rising energy costs and the growing needs of Ukrainian refugees and how to strengthen defenses in Eastern European nations alarmed by Russian aggression.

Opening the NATO summit, Secretary General Jens Stoltenberg said the alliance was “determined to continue imposing costs on Russia to bring about an end to this brutal war.”

Soon after, NATO allies extended Stoltenberg’s mandate for a year so that he could continue to direct the military alliance’s response to Russian aggression.

Stoltenberg was due to leave the post in September and had already been named Norway’s next central bank governor. The Norwegian government said on Thursday that the deputy governor would take over until he was free.

Russia unleashed its invasion on February 24, but instead of quickly toppling Ukraine’s government, its forces are bogged down in a grueling military campaign and its economy is suffering from the punishment of international sanctions.

“It’s been a month now,” Zelenskyi said Thursday in a separate address to Sweden’s parliament, the latest of many the Ukrainian leader has asked for help. “We haven’t seen destruction on this scale since World War II.”

After a month of fighting, Western analysts say Ukraine’s forces need to stock up on the weapons that helped slow and repel the Russian advance. Both sides claimed on Thursday to have inflicted further beatings. The Ukrainian Navy said it sank a ship used to supply armored vehicles for the Russian campaign. Russia claimed to have taken a town, Izyum, in eastern Ukraine after heavy fighting.

But in many areas, Ukrainian forces appear to have fought Russian forces to the point of stalemate, an outcome that seemed unlikely when Russian President Vladimir Putin unleashed his invading force.
Determined to persuade Putin to change course and under intense pressure from Zelenskyi to do more, Western nations said more aid to Ukraine was on the way.

In a signal that sanctions haven’t brought it to its knees, Russia reopened its stock market on Thursday, but only allowed limited trading. Restrictions on a reduced number of stocks, including energy giants Gazprom and Rosneft, should prevent a repeat of a massive sell-off that took place on February 24. Foreigners were banned from selling and dealers from short selling, otherwise betting prices would fall. The benchmark MOEX index gained 8% in the first few minutes of trading.

In Ukraine, Russian troops are bombing targets from afar, resorting to tactics they have used to rubble cities in Syria and Chechnya.

“Just look at what the Russian army has done to our country,” Zelenskyy said in his address to Swedish lawmakers. “A month of bombings similar to what we saw in Syria.”

Earlier, he also called on people around the world to gather publicly on Thursday to show support for his embattled country.
“Come to your squares, your streets. Make yourself visible and audible,” Zelenskyy said in a video address in English late Wednesday. “Say that people matter. freedom matters. peace matters. Ukraine is important.”

It is still unclear how many troops Russia has lost in pursuit of Putin’s goals. Russia has not given an update since March 2, when it confirmed nearly 500 soldiers were killed and nearly 1,600 wounded. However, NATO estimates that between 7,000 and 15,000 Russian soldiers were killed – the latter number equal to what Russia has lost in a decade of fighting in Afghanistan.
Ukraine also claims to have killed six Russian generals. Russia recognizes only one.

Ukraine has released little information about its own military casualties, and the West has not provided an estimate. Zelenskyy said almost two weeks ago that about 1,300 Ukrainian soldiers had been killed.

These fossil-fuel companies have sent more than $15 billion in taxes to Russia since it annexed Crimea, NGOs say