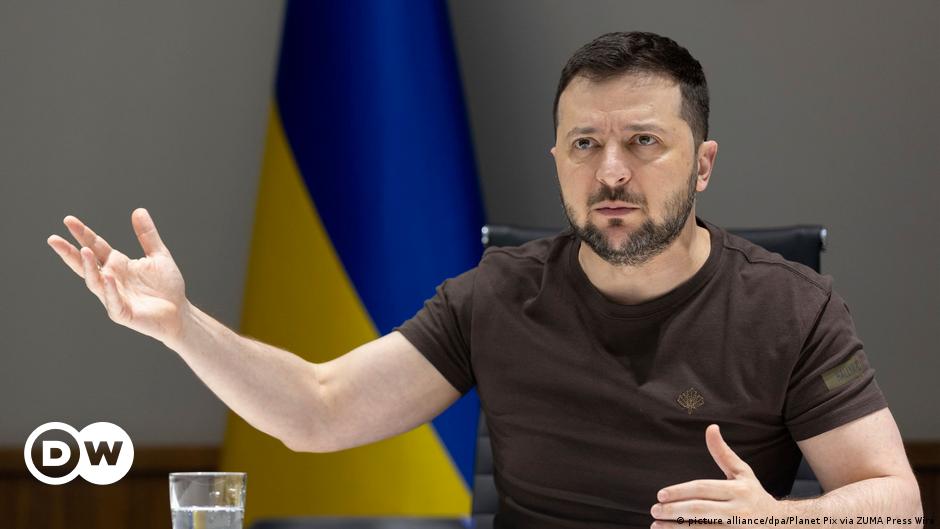 This article was last updated at 02:15 UTC/GMT

Zelenskyj plans to address parliaments in Africa and Asia

Ukrainian President Volodymyr Zelenskyy said he would address national parliaments in Africa and Asia to seek their support for Ukraine in its ongoing fight against the Russian invasion.

He stressed that his government is doing everything it can to draw the world’s attention to the conflict.

“Information about our needs should be constantly and daily in the news of all countries that are important to us,” he said in his late night address on Sunday.

Since the beginning of the Russian invasion in late February, Zelenskyy has been addressing parliaments around the world to champion the cause of the Ukrainian people.

“I will definitely continue to address the parliaments of Ukraine’s European partners,” he said, adding: “By the way, we are also working on expanding the geography of such special speeches in the parliaments of Africa and Asia.”

Sanctions block billions of dollars worth of Belarusian exports

The sanctions imposed on Belarus have blocked its $16-18 billion worth of annual exports to the West, Belarusian Prime Minister Roman Golovchenko was quoted as saying by the Belta news agency.

“Because of the sanctions, almost all exports from Belarus to the countries of the European Union and North America have been blocked,” Golovchenko said.

President Alexander Lukashenko has insisted that Belarus must be involved in negotiations to resolve the conflict in Ukraine, also saying that Minsk has been wrongly labeled as “the aggressor’s accomplice”.

The operator of Ukraine’s gas transit system said it has resumed operations at two distribution stations in the Kharkiv region and resumed gas supplies to more than 3,000 consumers.

“Both stations were closed due to damage to the main gas pipeline in the Kharkiv region as a result of hostilities,” the operator said in a statement, adding that the damage has now been repaired.

Ukrainian Foreign Minister in Brussels for talks with EU colleagues

Ukrainian Foreign Minister Dmytro Kuleba will meet with the foreign ministers of EU member states in Brussels on Monday and discuss the ongoing Russian invasion of Ukraine.

EU countries are expected to approve another 500 million euros in military aid to Ukraine after a proposal by EU foreign policy chief Josep Borrell on Friday.

Summary of events in the Ukraine-Russia crisis on Sunday

Sweden’s ruling Social Democrats said they backed the country’s NATO entry and secured a large majority in parliament for membership. After Russia invaded Ukraine, the party gave up decades of opposition to NATO membership.

The Finnish government has officially announced that it will apply for NATO membership after the decision was endorsed by the country’s ruling political party. The decision is expected to be approved by the Finnish Parliament in the coming days.

NATO will do its best to ensure that Finland and Sweden receive an expedited application process, NATO Deputy Secretary General Mircea Geoana told DW on Sunday.

Ukraine has already deployed many of its new artillery systems, American M-777 howitzers, to the front lines, the US said. The M-777 howitzer delivery is part of the US aid package for Ukraine. The M-777 is considered particularly important because of its long range and accuracy.

NATO has also pledged permanent military support to Ukraine in its conflict with Russia.

Four rocket attacks hit a military infrastructure in Lviv in western Ukraine, said the head of the regional military administration Maxim Kozytsky. Lviv, near the Polish border, was spared most of the heavy fighting reported across Ukraine, although the western city was sporadically hit by Russian attacks.

Jerry Amernic: Enough of the royals

Food Additive or Carcinogen? The growing list of chemicals banned by the EU but used…